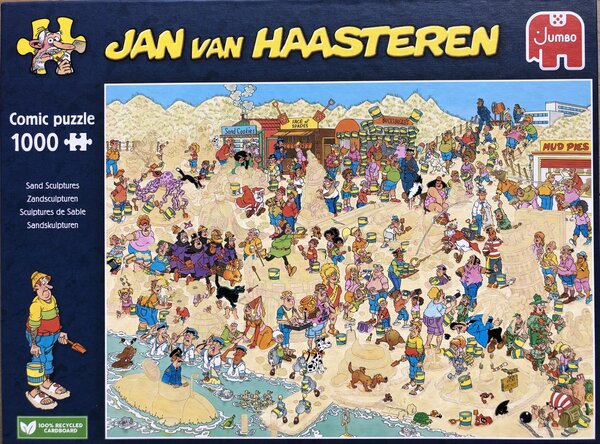 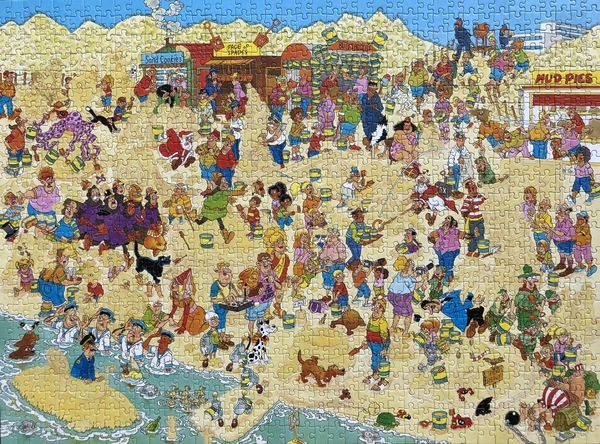 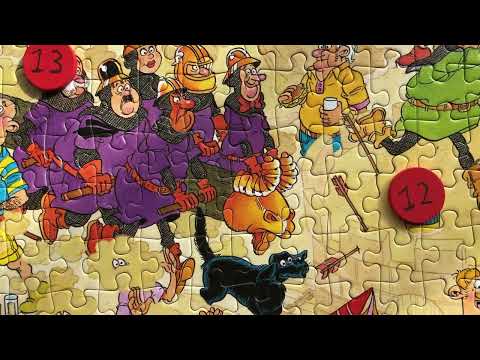 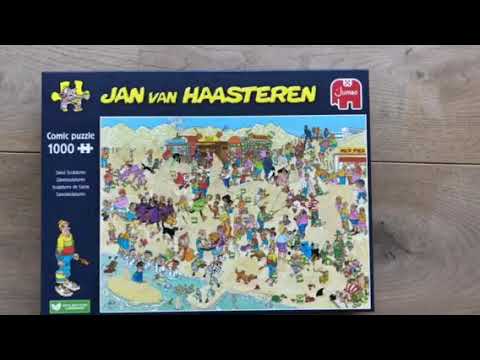 I have the puzzle 'Sand Sculptures' - this is number 20071, issue in 2022 on September 3rd. This puzzle is drawn by Dick Heins of the Studio Jan van Haasteren. It's this puzzle: 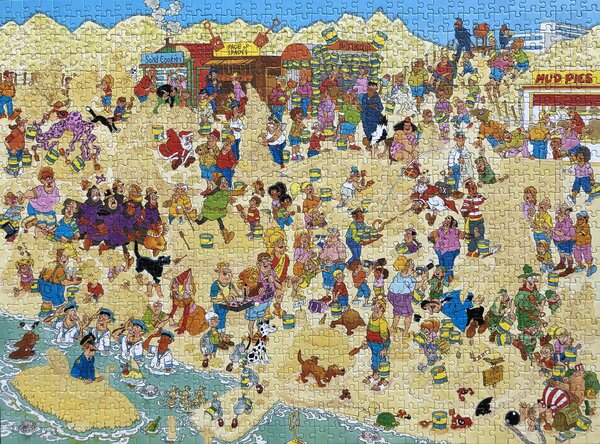 and this is the box:

General Review of these puzzles

I have made a General Review of this puzzle. With all kinds of fun and recurring elements in it. Note: I miss Dick Heins' famous cactus in it! Not seen….?

Note: After feedback from viewers, I see that I forgot a few things:
– Dick Heins' father
– Dick Heins' dog
You can see these two in the image below: 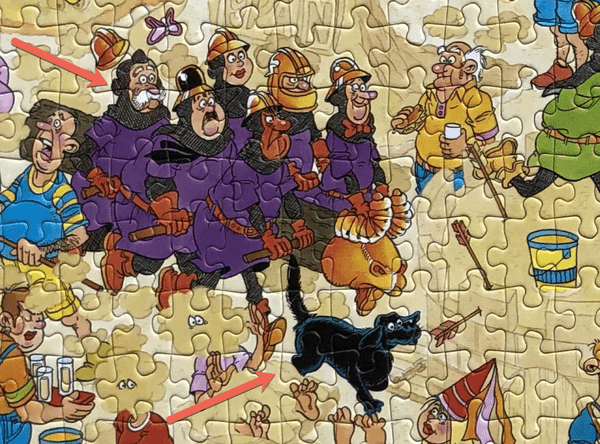 The cat is also visible on the puzzle, namely near the squid.

Coloring the puzzle by Dick Heins

Dick Heins shared a beautiful video on his Facebook page where he shows how he manually colors the puzzle: 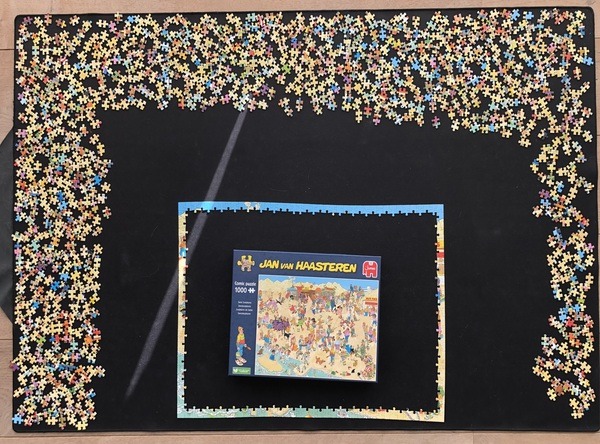 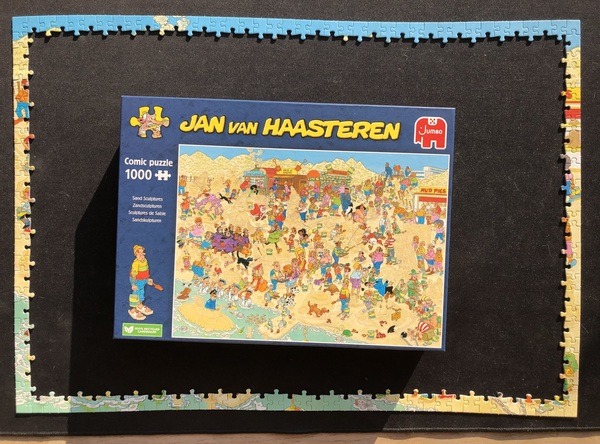 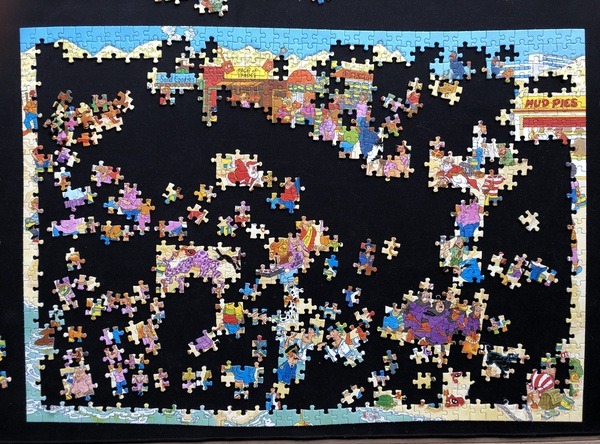 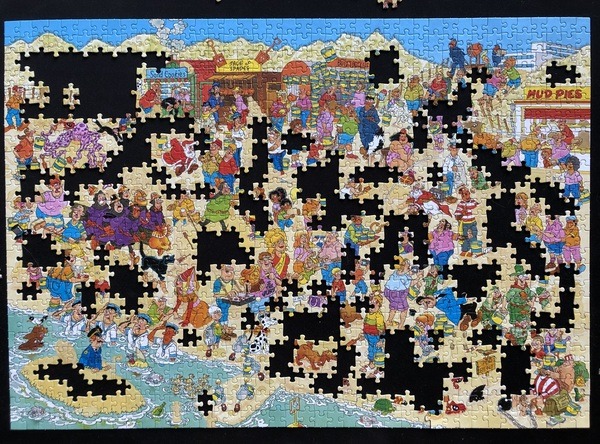 I came across another post through various forums on the internet. But that is an interpretation of the people themselves, this is probably not intended by Dick Heins. What exactly is the mother-in-law doing here with those red cheeks - a dirty mind is a joy forever 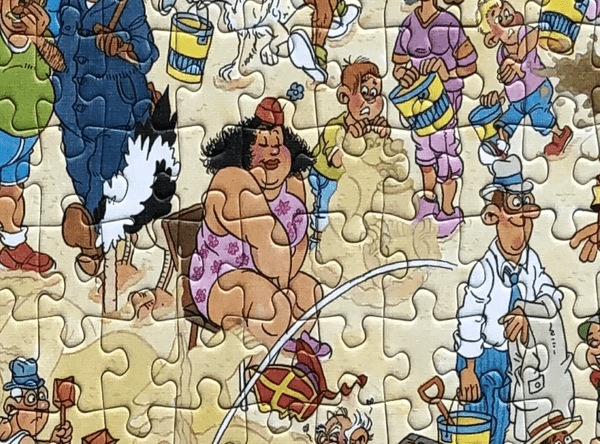 How long will it take you to complete this 1000 piece puzzle?

I made the puzzle 'Sand sculptures' in peace and took several days. Beautiful on a puzzle mat made on the floor in the living room. I do take the time, but not very precisely, it remains a hobby that puzzles! But to give you an idea of ​​how long it took me to complete this 1000 piece JvH puzzle: 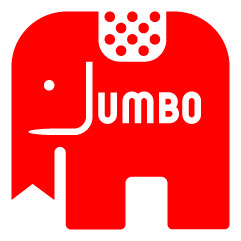 Jumbo (not to be confused with our supermarket Jumbo!) makes toys, games and puzzles. Jumbo, for example, has made the very well-known games such as “Human don't get annoyed” and “Stratego” and “PimPamPet”. Games that have been around for generations and are still widely played by both young and old. Jumbo has been making and developing toys since about 1900. In the early years of the company, only toys from other countries were imported to the Netherlands. However, since about 1930 it was decided to also make their own toys, at the time manufacturing wooden toys, which was very popular at the time. Almost all toys in those years were made of wood. An important spearhead was that the toys made by Jumbo had to be of very good quality; it had to be as strong as an Elephant. An elephant had to stand on it! The red elephant has been the hallmark of Jumbo's games and puzzles for years. The name Jumbo and the red elephant together form the logo from about 1935. The Jumbo elephant is drawn by Mr. Möhr. He worked at an advertising agency and regularly signed for Hausemann & Hötte. Mr Möhr was at one point commissioned to design a beautiful new elephant logo for the Hausemann & Hötte toys. The logo has changed a bit since then. For example, the eye has grown over the years and has dropped slightly more, resulting in a friendlier elephant.

In the past, the elephant was not only used in the color red, but in all kinds of colors such as blue, yellow, black, white and green. All those colors were cozy and playful. For example, one time there was a yellow elephant on the box and the other time a red one. It was usually looked at which color best matched the color of the box. It was not until the end of the 60s that the red elephant was definitively chosen. Red is a color that stands out and attracts attention.

From 1945 Jumbo also started to focus on games made of cardboard. Jumbo has therefore been a guarantee for strong quality for years! Jumbo is a unique Dutch company with a rich history, with its head office in Zaandam. About 130 employees work for Jumbo. With a turnover of €75 million, Jumbo is a medium-sized European player in toys. Jumbo has sales offices in the Netherlands, Belgium, Germany and the United Kingdom. They export to more than 25 countries around the world.

In 1980 Jumbo starts the production of Jan van Haasteren Puzzles.

Reviews about this puzzle

I wrote the above review in September 2022. And it is a very nice puzzle from Dick Heins. Especially because you can find additional hidden recurring elements through the sand sculptures that Dick had drawn. Set of funny elements in it. Recommended!

Made this puzzle? Upload your photo + optionally text

If you have made this puzzle, please upload your puzzle to us, including a text, how you found it to make this puzzle.